Fall Fishing in the Midsouth 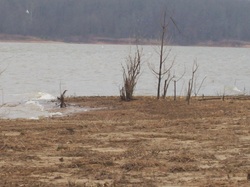 During this time of year, all of our local resevoirs are pulling down lake levels preparing for Winter and Spring rains.  Fish are beginning to scatter and have become harder to pattern, but easier to catch numbers at times as schooling on shad has becomes the predominant pattern. I consider Fall fishing to start right after Labor Day in this area as that is when we typically begin to see 60 degree nights again and water temperatures begin to cool again. The local water authorities begin to pull down water levels at this time to prepare for winter rains causing fish to migrate like spring except reversed with fish coming from the ledges and main lake summer haunts following the shad into the shallows as the water cools. As the water continues to cool the fish then move back out deep as winter sets in. The key to Fall is chasing the shad in most lakes as the bass are feeding up for winter. This is actually my favorite time of year to fish since most outdoorsmen have gone to the woods and fields during the hunting seasons and the lakes are pretty barren.

As water temperatures dip below the 80's the bass begin to leave the ledges and deep summer haunts and spread out with the schools of shad. Fronts of creeks and main lake points begin to hold more fish and bigger fish. The fish seem to almost move in waves with the smallest shad and bass making the moves first and bigger fish following later. Big crankbaits, jigs, worms, and topwaters continue to be the best options right now as fish make their first moves. Also, grass starts to become a real attractant to bass as it provides better oxygen and cooler waters that the fish are looking for.  As waters cool into the  low 70's to upper 60's they move a little farther back in the creeks and to secondary creeks and flats where the shad are beginning to congregate and school up feeding up for winter and a bigger wave of bass in number and size begin to follow and this can make for some of the funnest fishing of the year. With big schools of shad and the bass starting to school on them in large numbers mid running crankabaits, soft minnow baits, spinnerbaits, and topwaters become some of the best baits to use. Smaller a-rigs can be a great choice as well this time of year. As the water cools to the low 60's the biggest fish move shallow as well as the largest shad as well. They still concentrate on channel swings and structure close to flats in areas similar to those you would typically look for big prespawn females. As the water cools into the 50's the trend reverses towards their winter haunts, so you just work back out to the main lake like you would during post spawn periods.

​Some really good hints this time of year are to use your eyes and graph to locate schools of shad and follow the bass into those areas and figure out how to catch them. I like to watch for gulls and birds that feed on shad to help me locate where the shad are congregating to help start my search and they can be your best ally. Wind direction can also help position fish and direct you to areas where the best activity will occur. Wind blown flats and banks tend to congregate the best schools of fish so always consider wind direction when planning your areas to fish. Much like trout fishing I believe matching the hatch this time of year is vital. Try to use baits that are the same size and shape of the bait, I like to make the bait stand out somehow with a flash of chartruese or something to distinguish them from the other thousands of bait you are competing with. The last major structure change close to spawning flats also usually hold the largest bass to be found in the area. When I catch one big fish I will concentrate in the area because there will be more in the area. Sometimes being patient is the best key wait to see the splash before casting to an area and you are more likely to be rewarded. This can be frustrating fishing, but very fun as well.

Topwaters for schooling fish are the most popular of course and are by far the most fun. A walking bait allows you to cover large areas and have been really effective for me. Another great bait is a fluke with a weighted hook to allow you to be more precise with your cast and to work it faster. Mid running crankbaits are also great choices especially smaller or flat sided baits allow you to cover lots of water and catch those fish under the schools of bait that are maybe not as active with a reaction strike.  Spinnerbaits and swimbaits are a great choice as well when there is a good ripple on the water. Squarebill crankbaits around wood and rocky banks can be another killer pattern this time of year on channel swing banks and flats with channels running through them. Another neat trick I don't see used as much is a carolina rig with shad colored plastics to mimic dying shad on the bottom. Also, swim minnows on a jighead or a-rig are a great choice as well.  As the water continues to cool into winter a jig also comes into its own as fish begin to feed on crawfish for that final binge before winter.

I hope you take advantage of the great fishing that can be offered this time of year as well as with lowered water levels the opportunity to scout out some spring shallow water areas for next year. Good luck and catch some big ones this fall!!